Everything you need to know to enjoy the Caminito del Rey, the most important attraction in the province of Malaga and an essential for visits to the city of more than one day.

We recommend you consult and browse the Caminito del Rey table of contents for your convenience.

We go back to 1901 when the Chorro Hydroelectric Society saw the need to have an access to facilitate the passage of maintenance workers, transportation of materials and surveillance of the Gaitanejo and Chorro Falls. This is how the first version of a walkway was created that ran along what we now know as “Caminito del Rey”. 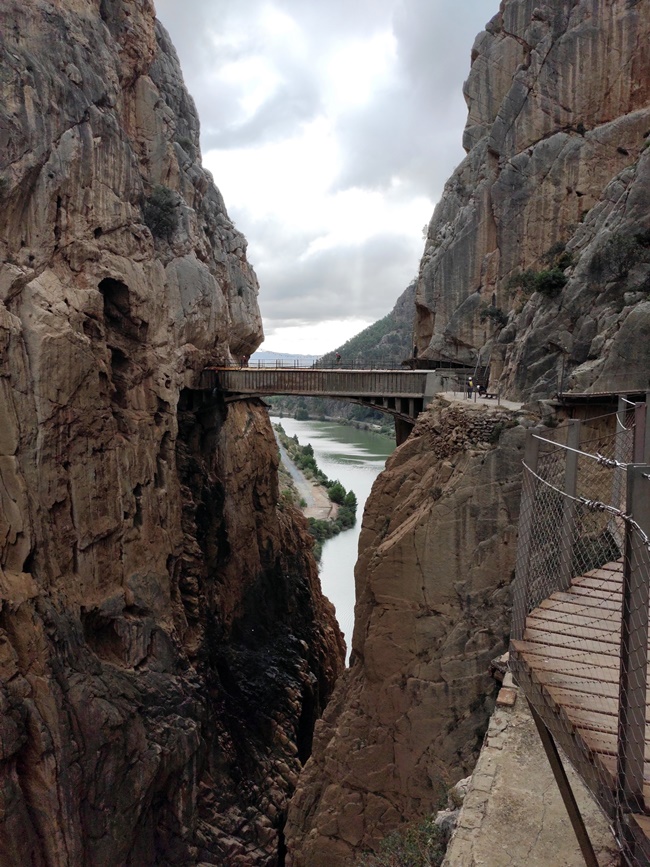 The initial road, completed in 1905, began next to the Renfe train tracks and ran through the Gaitanes Gorge, connecting and facilitating passage between both sides.

While the reservoir was under construction, between 1914-1921, numerous people visited the area for the fantastic landscapes that could be seen during the tour and for the construction itself.

Who built the Caminito del Rey?

El Caminito del Rey was built by the civil engineer Rafael Benjumea, who later became Minister of Public Works from 1925 to 1930.

Benjumea was in charge of Two other large works in the area: the hydroelectric power station and the Pantano del Chorro, later known as the Conde del Guadalhorce reservoir.

The realization of all these works in the Chorro area earned Benjumea the title of count of Guadalhorce, which was given to him by Alfonso XIII on September 12, 1921. 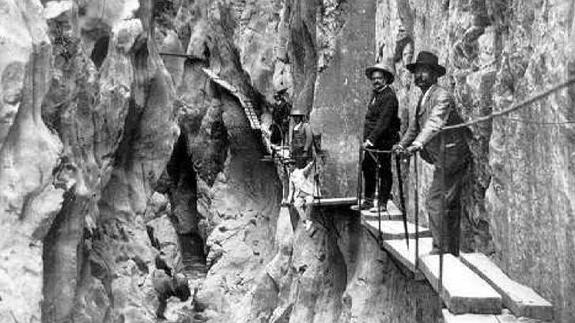 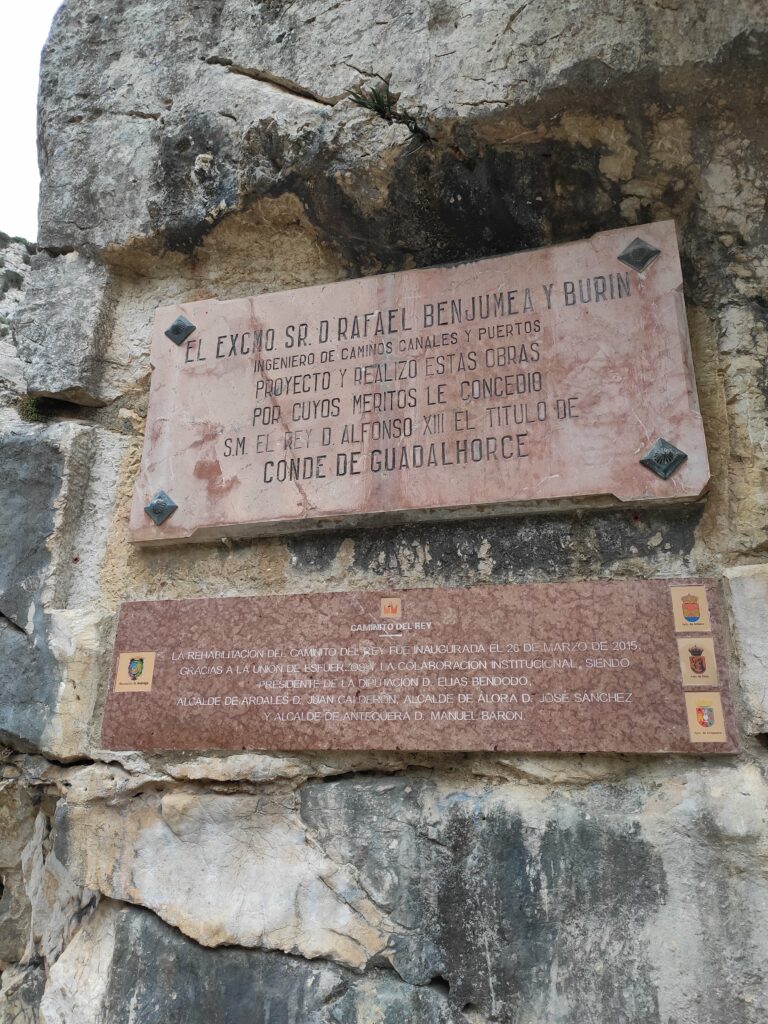 Why is it called the Caminito del Rey?

Due to the growing interest in the area, Benjumea changed the old wooden boards, which linked the plant and the reservoir, for a cement walkway and It was decided to reform the bridge between the two sides of the Gaitanes gorge, then calling it the “balconcillo de los gaitanes” and later “Caminito del Rey” after the visit of King Alfonso XIII on May 21st, 1921.

To inaugurate the Guadalhorce-Guadalteba reservoirs, King Alfonso XIII had to walk that path and that is where his name comes from.

Decay of the Path.

Unfortunately, the Caminito del Rey began to fall into disuse and the lack of maintenance left it in a terrible state, without a railing for much of the route and with many parts in ruins.

The old Caminito del Rey began to be dangerous (unlike the great security that the current one presents).

In the 90s it became very popular for climbers and adventurous hikers, however some fatal accidents caused it to be closed to the public in 2001 and fines of up to €6000 were even decreed for passing through it or being around. 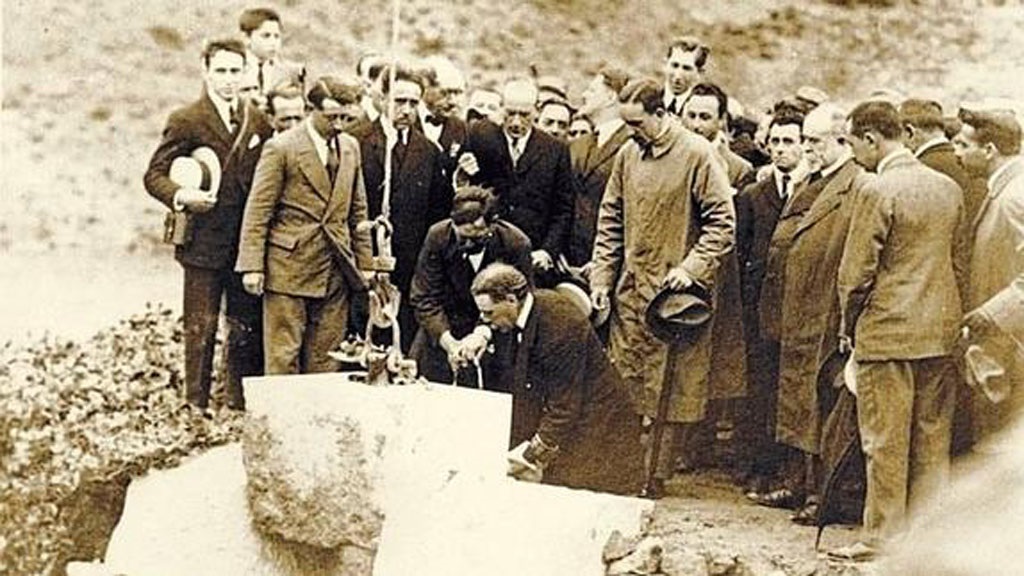 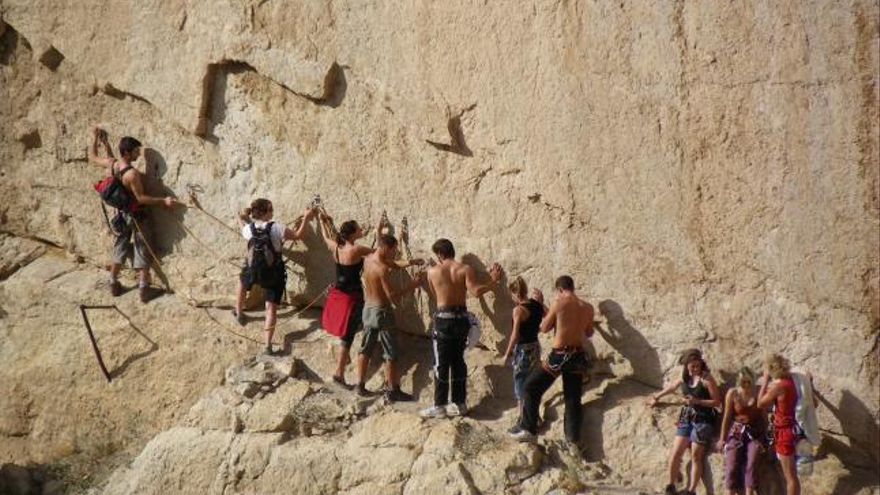 In 2009 the project went out to tender, with the collaboration of the Provincial Council of Malaga and the Junta de Andalucía. In 2014, the refurbishment works began, which lasted for a year.

The first 5 things you should know about the Caminito del Rey.

In this guide you will find all the necessary information, in detail, to plan your visit, but I wanted to highlight 5 points that are essential on the Caminito del Rey.

How far is the Caminito del Rey?

El Caminito del Rey is 7.7 kilometers long , being the part of walkways (the most beautiful and well-known) of 2.9 km , controlled by an access that requires input.

How do you walk the Caminito del Rey?

The route of the Caminito del Rey can only be done on foot and is linear, that is, in one direction, always in the same direction and ONLY HAS ONE POINT OF ENTRANCE, by the so-called north access, near Ardales and has its exit in the south access, El Chorro area.

How long does it take to walk the Caminito del Rey?

The excursion to Caminito del Rey requires advance ticket reservation and it takes about 4 hours to complete it, so calculate your time well (you should arrive at the north access 1 hour before the time indicated in your ticket).

How difficult is the Caminito del Rey?

The tour is suitable for all audiences (children from 8 years old), although a minimum physical condition is recommended .

I also recommend you go with comfortable clothes and appropriate footwear to a trail and dirt track (the first part).

Hydration is key, especially in summer, because it is a long excursion, so bring water or other liquids. And don’t forget sunscreen and sunglasses.

How to get to the Caminito del Rey?

El Caminito del Rey is located in the Desfiladero de los Gaitanes Natural Park, between the municipalities of Ardales, Álora and Antequera, in the province from Malaga, although for practical purposes it is considered to be in Ardales, more specifically in the area called “El Chorro”, due to the reservoir of the same name.

For the near future, the opening of the Visitor Reception Center, located in the Port of the Watchtowers. The first thing we should know is that the entrance to the Caminito del Rey is unique and must be done by the called north access, being the only option to arrive on foot at the beginning of the route.

Where is the entrance to the Caminito del Rey?

A) Short tunnel and Gaitanejo path

My advice is to arrive in this area at least 1 hour before your entry, to do it calmly and enjoy the scenery. 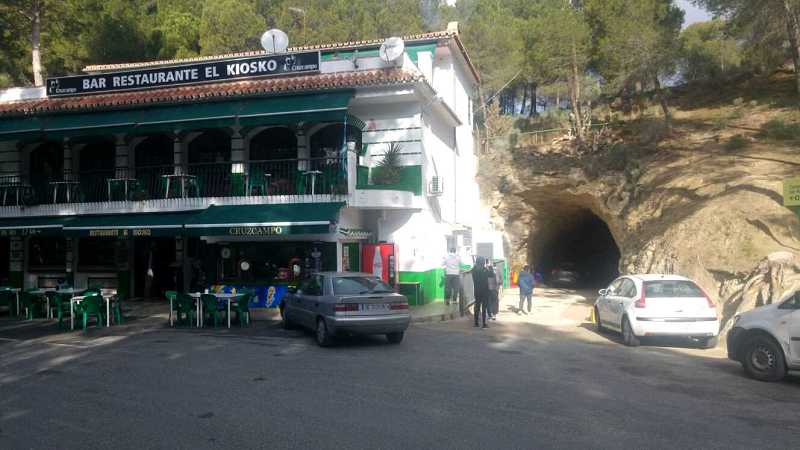 B) Pedestrian tunnel and Gaitanejo track.

You can take both accesses, which you can decide based on the time available, but my advice is to take the pedestrian tunnel option because it is more direct. 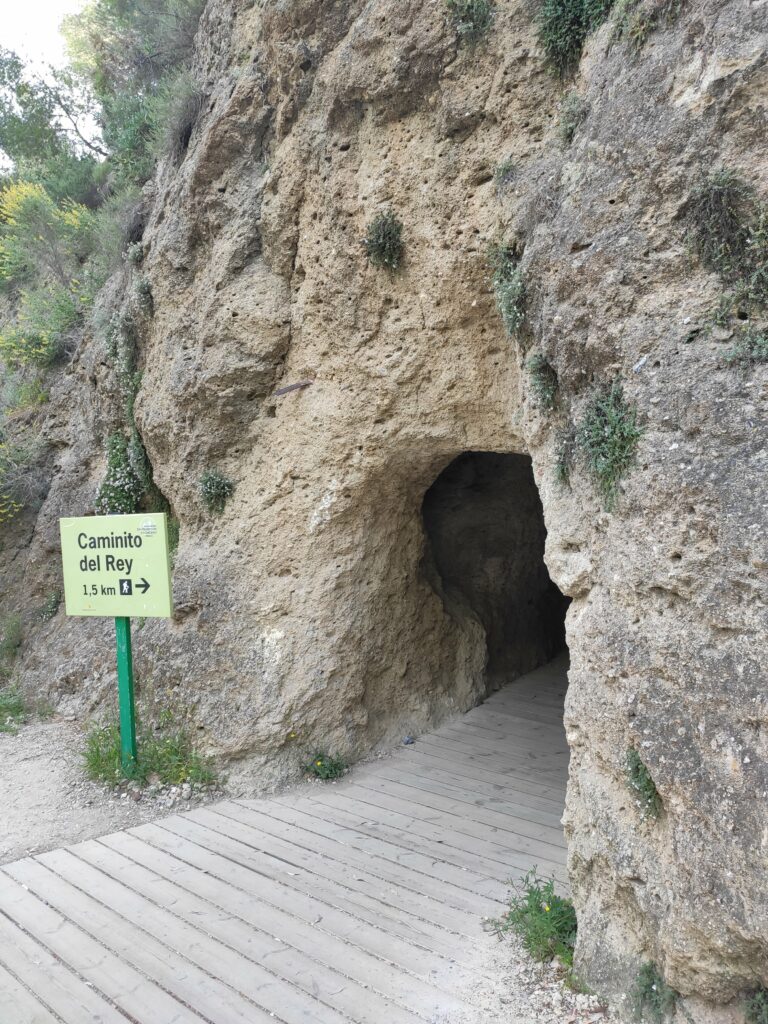 As we have mentioned there is only one access point (north) to the Caminito del Rey, but to communicate the route there are some shuttle buses that take us from the southern access (end route) to the north access (start of the route) and vice versa.

How to get to Caminito del Rey from Malaga by car?

Arriving by car is the most common option to go to the Caminito del Rey on your own. For this we must leave about 2 hours before the start of the visit, to be able to make the journey to Ardales, park the car and make our way to the entrance of the Caminito del Rey.

The journey by car follows the A-357 and then the MA-5403 passing through the municipalities of Cártama, Pizarra, Carratraca, and Ardales. It is 60 km and one hour of travel.

Where to park on the Caminito del Rey?

How to get to the Caminito del Rey by train from Malaga?

The problem lies in two aspects, on the one hand the infrequency of this journey and on the other, that we must take the shuttle bus to get to the north access where the entrance point to the Caminito del Rey explained above is.

And lastly, I offer another option which can be sleeping in Ardales or Álora and waking up near the Caminito del Rey to make the most of the day.

The first thing is to know the types of entrance to the Caminito del Rey and their prices.

We have 2 types of tickets for the Caminito del Rey:

Important facts about the tickets.

Where can I buy tickets to go to the Caminito del Rey?

They can be purchased at the Caminito del Rey official ticket purchase page , however access to the €10 general tickets requires buying them well in advance (4-5 months), so it is usual to find only the €18 guided tour tickets .

To give you an idea of ​​the deadlines, I leave you the opening dates for places in 2022:

Other providers offer all-inclusive packs and tickets, which can be a solution if you don’t get tickets on the official website or are looking for them to do everything else for you easy.

El Caminito del Rey is open from Tuesday to Sunday all year round, except January 1, December 24-25 and 31.

Once all the details about the Caminito del Rey are known, it is time to enjoy the route, also known as the Camino del Rey de Málaga.

The part of the Caminito del Rey that requires an entrance is 2.9 km long and runs along footbridges (wooden) attached to the rock inside a canyon, with sections barely a meter wide, hanging up to 105 meters above the river, on walls that are vertical.

We are facing a unique natural environment, which runs between two gorges, canyons and a large valley, partly by paths and partly by footbridges.

As we have commented, the Caminito del Rey only has one entrance access, so once there we will be at the visitor reception booth, where after showing our entrance, they will give us a protective helmet, footwear and unauthorized items will be checked (umbrellas, walking sticks, hiking, selfie sticks…) organizing the groups according to the planned schedule. 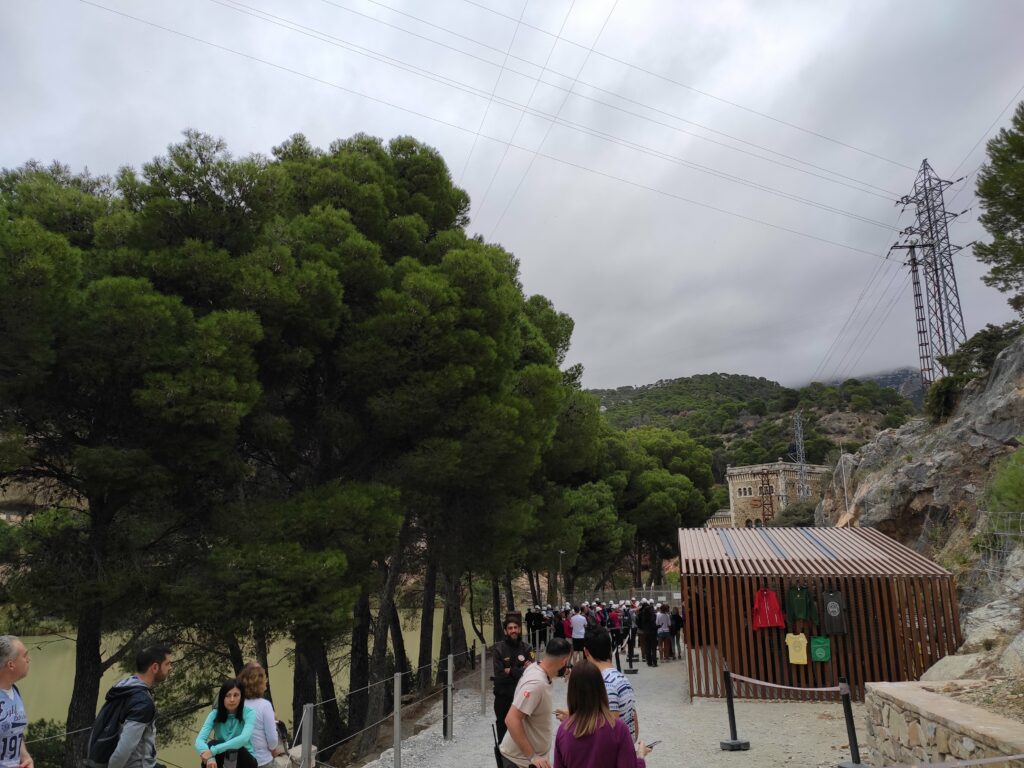 The first thing we see is the Gaitanejo Hydroelectric Power Plant, one of the oldest in Spain, and where we still see a large “S” on the facade reference to the Sevillana de Electricidad company, former owner.

We go a short way along a dirt track and arrive at the entrance turnstile, which gives us access to the gorge barely 10 meters wide.

A little further on we arrive at the place of the grove, which is located between the Gaitanejo gorge and the second canyon on the route, the Tajo de las Palomas

We advance until we reach the valley of the hole, a large natural space with lush vegetation. We have already traveled almost 1 kilometer and we will find a rest area and some information panels.

Photos of the Caminito del Rey. 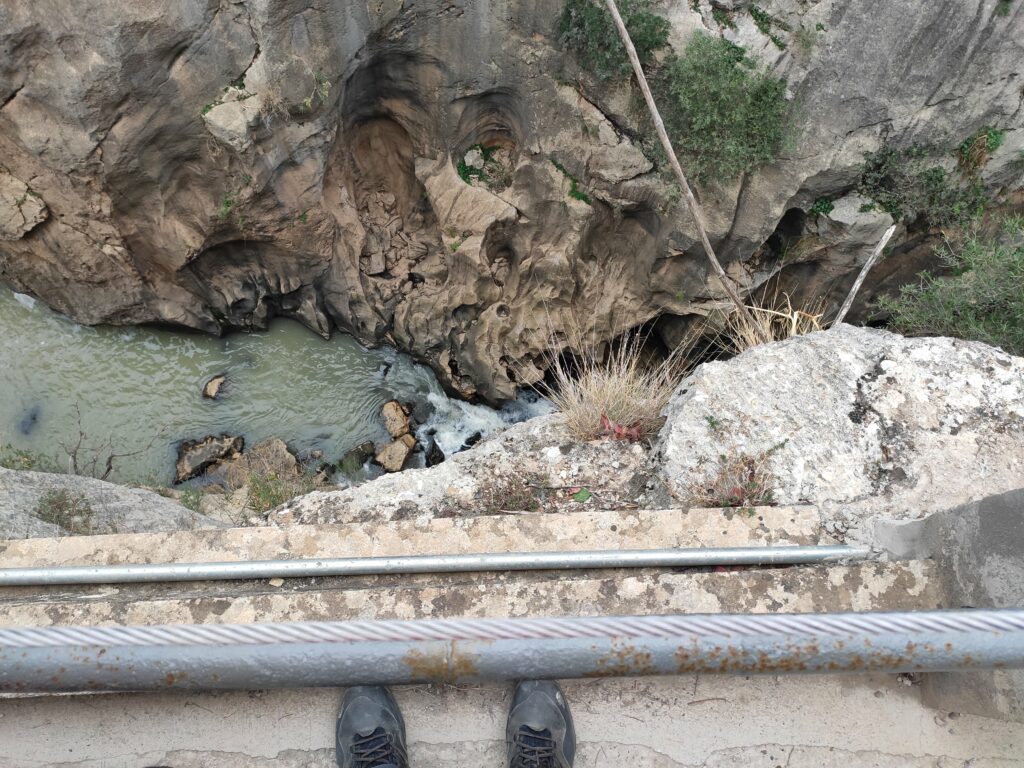 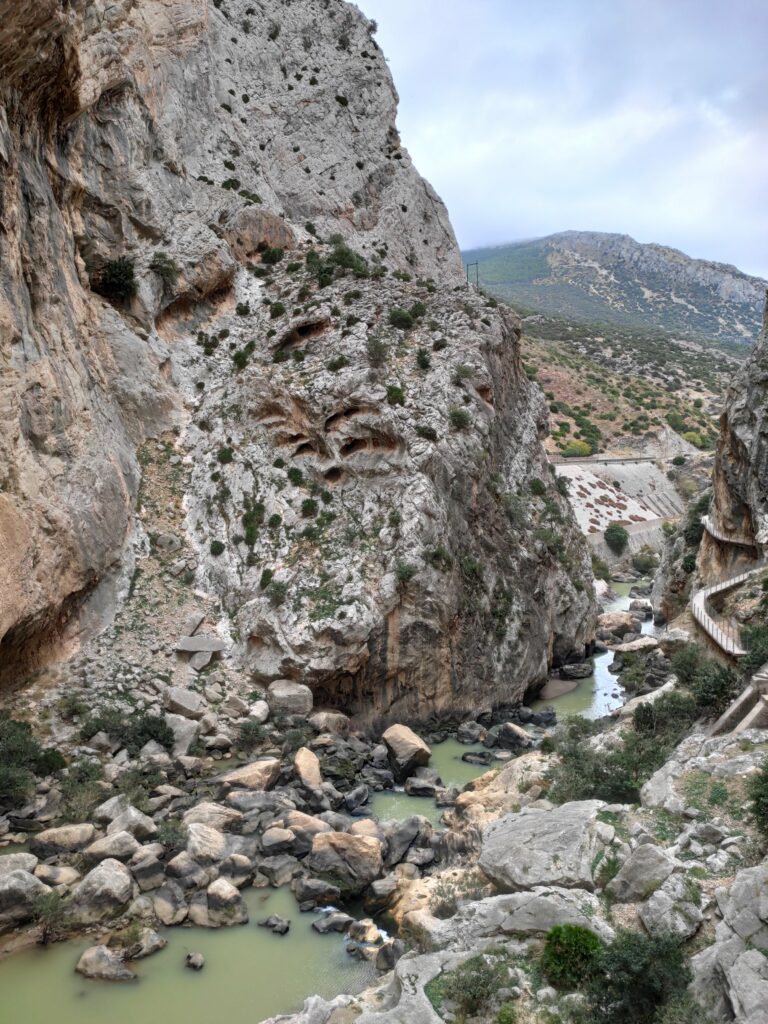 We now face the second part of the Caminito del Rey, by walkways located more than 100 meters high. We are facing one of the most impressive areas of the path, there are even remains of the old Caminito del Rey, very deteriorated after more than a century of life.

And we arrive at the most photographed place of the tour: the suspension bridge.

It is a bridge anchored with long stays at a height of 105 m, from wall to wall, and 35 m long, which conveys a great feeling of emptiness when looking down… so refrain if you have vertigo or fear of heights. 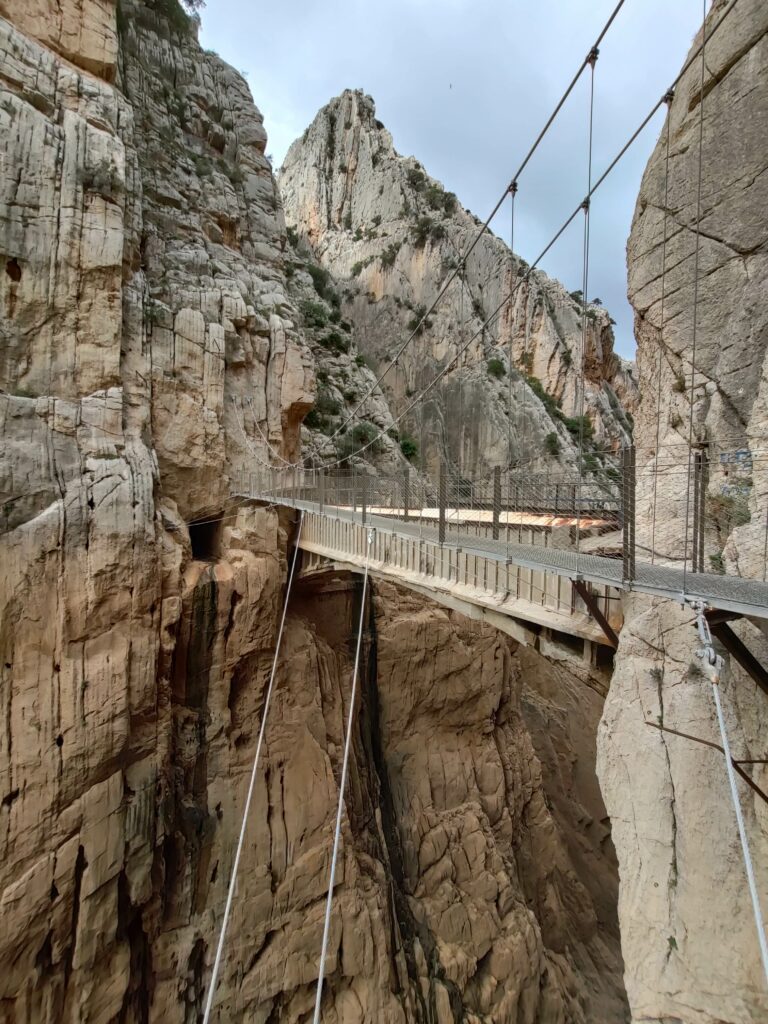 After passed the suspension bridge we have to continue walking a small section of ascent with steps to then descend to a landing and we continue walking until completing the 2.1 km of descent to El Chorro, southern access to the Caminito del Rey.

Once in El Chorro, depending on how we have reached the Caminito del Rey we must take the shuttle bus to the north access (where we will have parked), the train to Malaga or the bus to Álora. 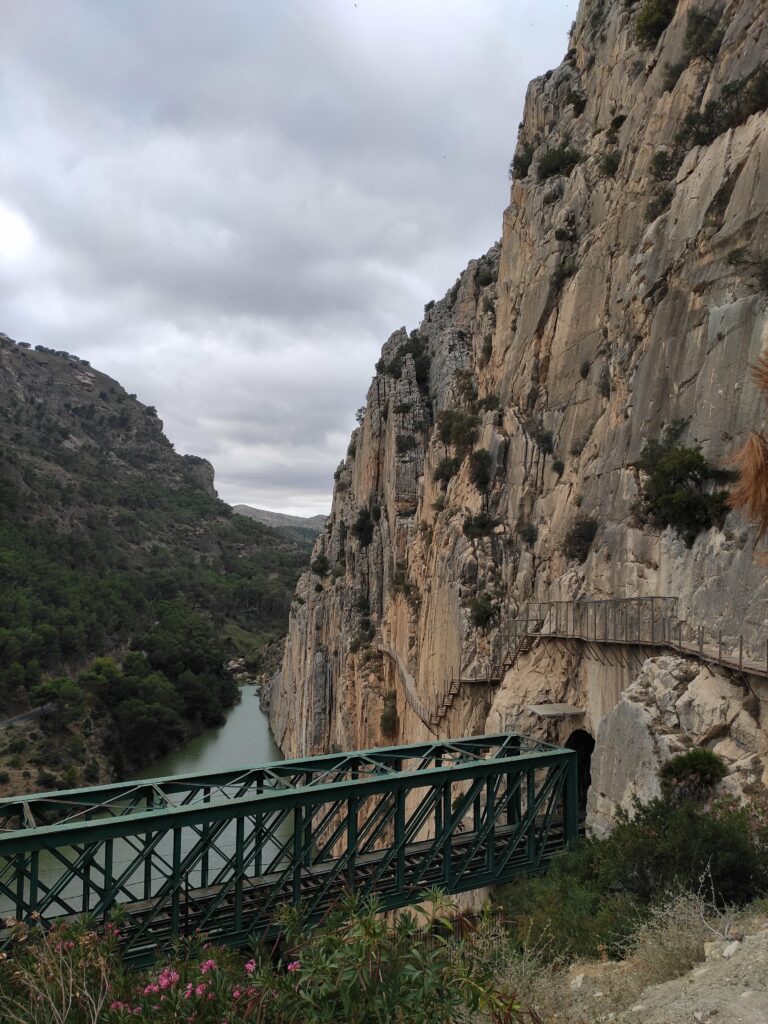 End to my guide on the Caminito del Rey in Malaga, if you are in the Chorro-Ardales area and still want to do more activities, I recommend the climb to Pico del Convento, 670 meters high, that offers spectacular views of the area. ¡Hola! My name is Alejo Tomás.

I´m from Málaga, creator of Street Art Málaga and 21W. I completed a round world trip during 1 year, visited the new 21 wonders of the world and I´ve lived in many countries (France, Germany, Denmark, Italya). Now I´m back and I decided to show my city.