The Soho Malaga has become one of the best known areas of the city, being art urban, street art and graffiti, which we can see in its streets, one of its great attractions.

However, it is not the only interesting thing about the area, because to its excellent location, we add the opening of the Soho Caixabank theatre, its new luxury hotels, and its bars and restaurants, since eat in Soho Malaga has become its other great attraction.

This route of graffiti and urban art through Malaga’s Soho is ideal for those who visit Malaga for 2 days or for those passionate about street art.

Where is Soho Malaga?

The first thing is to locate ourselves and be clear about which streets I will talk about on my route through the area. We are going to create 4 very simple limitations to “put inside” everything that is Soho.

The first would be the CAC Málaga, the starting point of our route, the second would be the Alameda principal, the third the Heredia pier and the last one is the Plaza de la Marina.

With that we would have the area where Soho Málaga would be framed, formerly known as “Ensanche Muelle Heredia”.

Likewise, we highlight its two main arteries, one is Casas de Campos Street, pedestrianized in almost its entire length and the other would be Tomás Heredia street, also a pedestrian street.

Locating ourselves between these two streets we can walk to all the gastronomic offer of the area in less than 10-15 minutes. 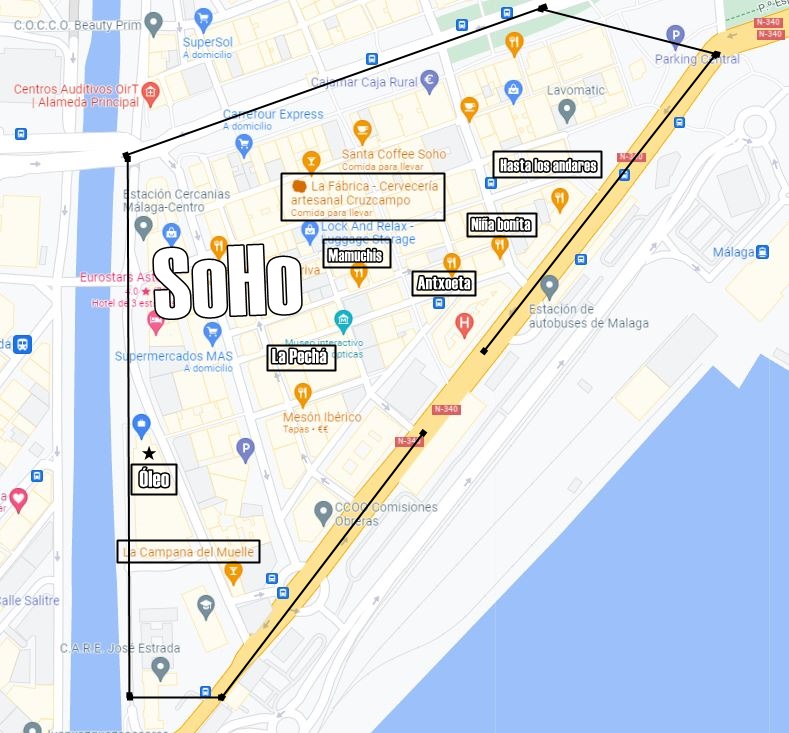 Curiosity: why is it called Soho?

The name comes from its revitalization as an arts neighborhood in Malaga within the M.A.U.S. project (Málaga Urban Art Soho) carried out in 2013 and which aimed (with partial success) to convert a deteriorated area into a neighborhood where art flowed through its streets.

The name SoHo arises in New York, due to the union of the South and Houston areas, where an arts neighborhood was created with artists such as Keith Haring and Jean Michel Basquiat

You will see the name of MAUS indicated by the area, they even have their own website, where You can find information about the artists, the works, even the walls that are waiting for an artist to be painted.

However, what has been achieved in Malaga is to have an area with several of the most important muralists and street art artists in the world, many hotels and tourist apartments , a good gastronomic offer and only 1-2 art galleries and, practically, no artist living among its streets. 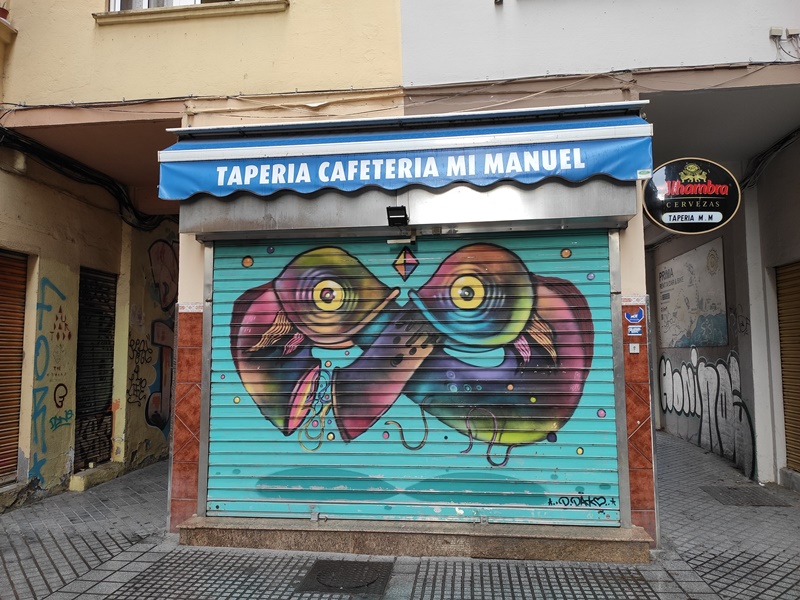 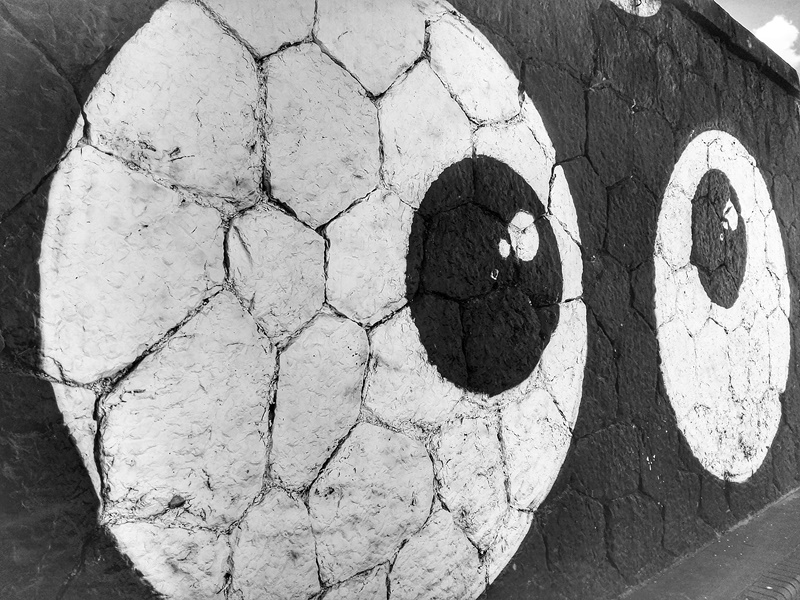 Of course, the name of Soho has caught on among everyone and even more so after the opening of the brand new Soho Málaga Theater by Antonio Banderas.

After explaining these points, it is time to start our route of urban art, street art, murals and graffiti by Malaga’s Soho.

By clicking on each artist you will find documentaries, produced and created by me, to delve into them at my youtube channel.

We will start the tour at the Contemporary Art Center (CAC) from where we will walk, along the river, to the end of the building, from where we will see the two most important murals in the area : the pilot of D*Face and the woman of Obey (Shepard Fairey).

These walls are spectacular for their size, their definition, their quality and their style. 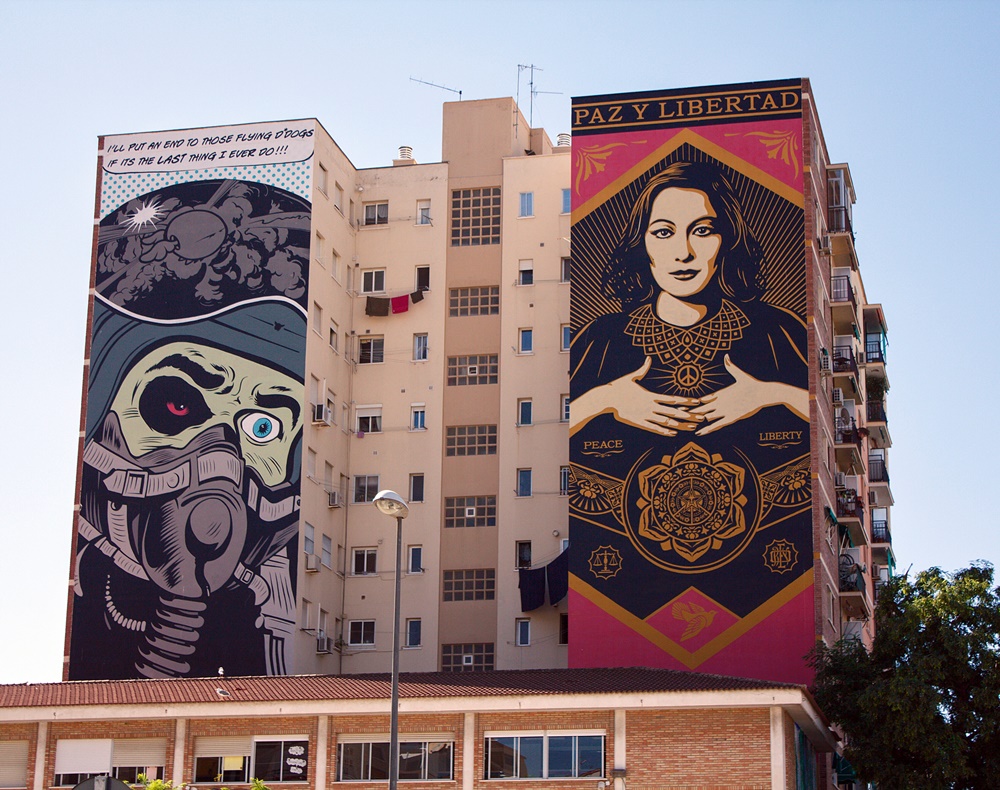 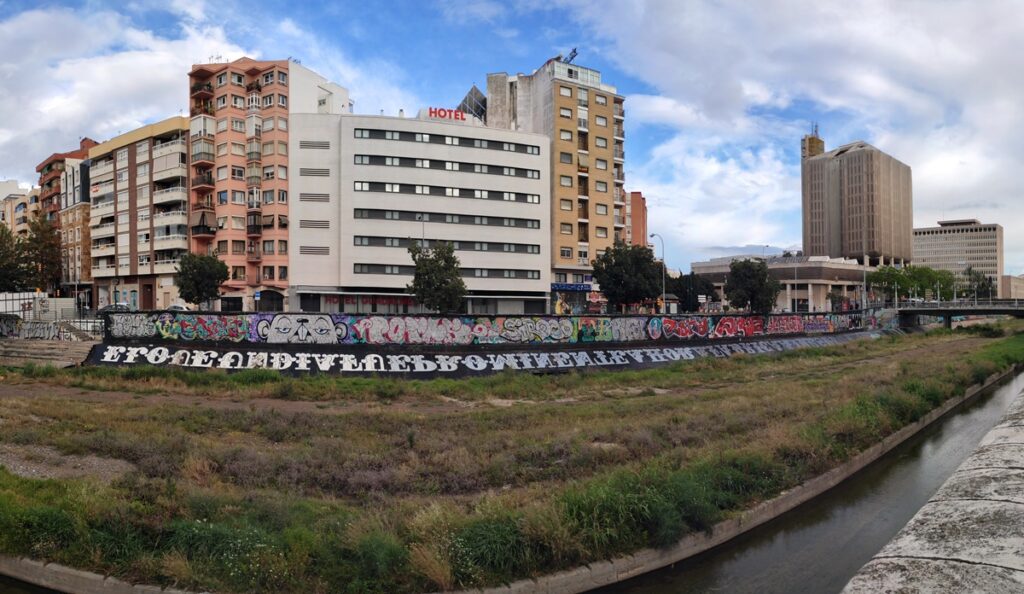 On the banks of the Guadalmedina river, in both directions, there are many more graffiti, so if we want, we can go down and photograph them.

The next stop will be on the side of the CAC, opposite the river, where in the Germany Parking we can see the work “Hello, Welcome to Spain”.

Now we enter the Valencia Passage where we find several painted shop shutters, some legal, others illegal…

We cross the pedestrian crossing of the Alameda de Colón and go to the left, reaching the intersection with Calle San Lorenzo and Calle Barroso, where we can see several works included within the Wall Free Expression, where one stands out that was included in the economic item of Soho Málaga. Corresponds to Boa Mistura and is titled “Think of a wish and go out and find it.” 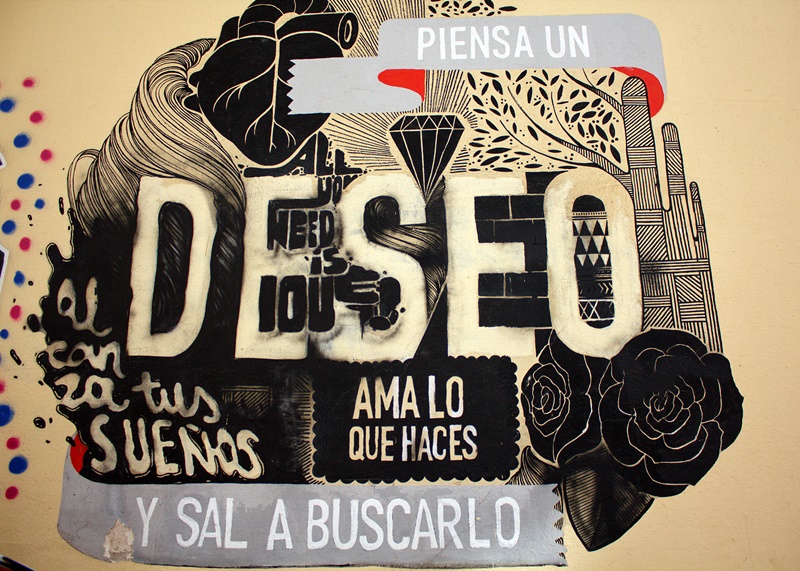 Then we walk to the left to find the pedestrian street of Casas de Campo, where we can see the works of Roa, Obey, D*Face, made legally, together with others made illegally and that coexist in the area (for example, the work of Philip Mcqueen or the pyramid of Reptilians). 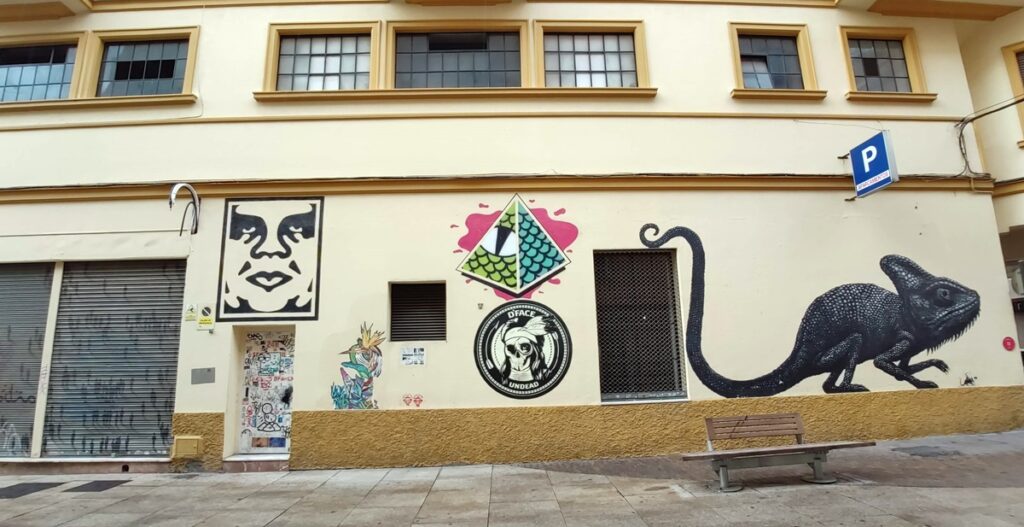 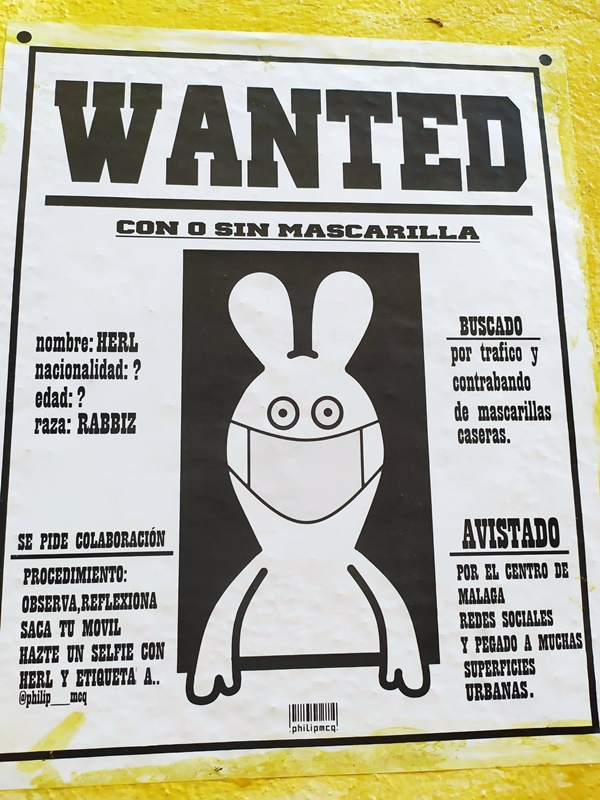 Even if you look closely at the white door you will see that it is full of graffiti (signatures), stickers and other forms of expression linked to urban art.

We continue through country houses until we reach the intersection with Somera street, where we can see two large murals on the two sides of the Bahía Málaga hotel. The first made by the Catalan artist Aryz and the other by the couple formed by the French Remed and the Spanish Okuda, titled “The dance of Venus and the sailor”.

Now we continue along Barroso street until we reach the Tomás Heredia pedestrian street, where we can find, if we look up, the second work in the city by the American Obey, is titled “Femme fatale”.

We now head towards the Alameda Principal where we will find at the crossroads with Tomás Heredia the spectacular work of the Chinese artist Dal East. 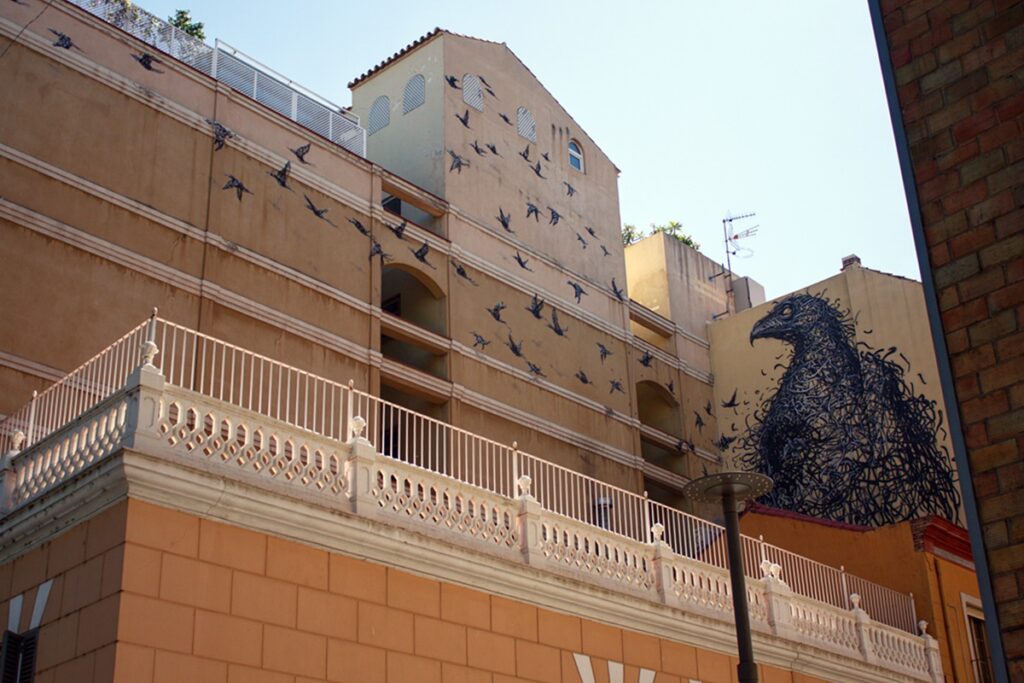 Very close to this wall and in the opposite direction to Plaza de la Marina and Calle Larios we find the wall of the South African artist Faith 47.

We retrace our steps to see at the crossroads between Vendeja and Tomás Heredia another great mural, the work of the artist from Malaga Dreucol. We continue along Calle Vendeja until the intersection with Calle Córdoba, here we will find the mural of TVBoy, composed (initially) by 5 famous characters from Malaga (Picasso, Banderas, Marisol, Dani Rovira and Chiquito de la Calzada).

The last stop takes us to the new Teatro Soho Málaga, but not before passing by the painted façade of the Disaster Street Wear store. Taking Casas de Campo street again and seeing the huge wall painted by the Belgian artist, Roa, the same one who had painted the Chameleon seen earlier. 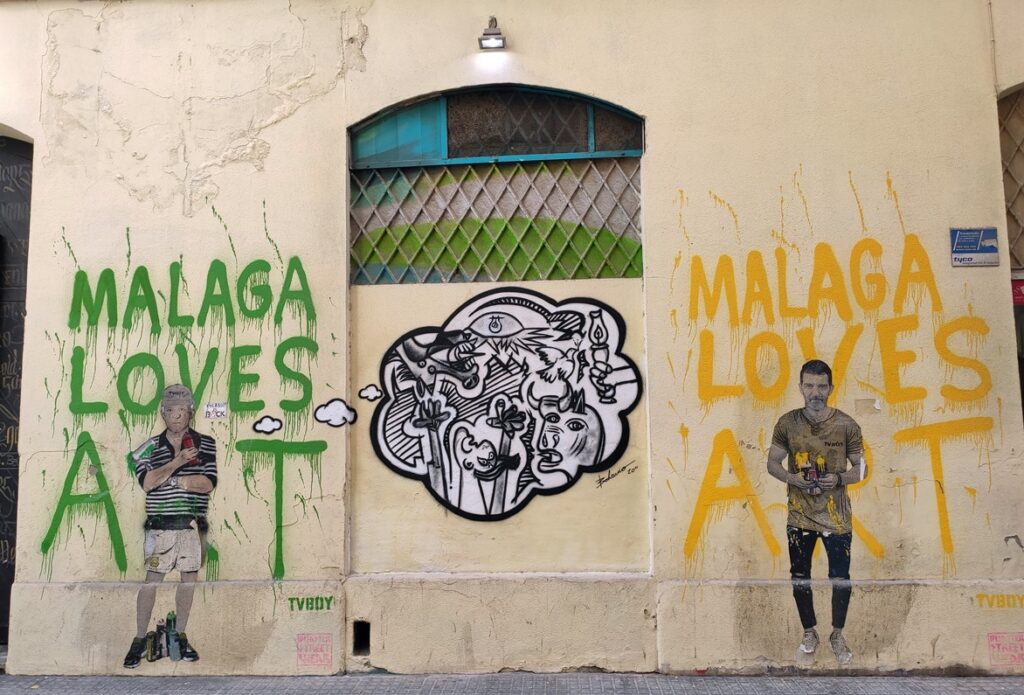 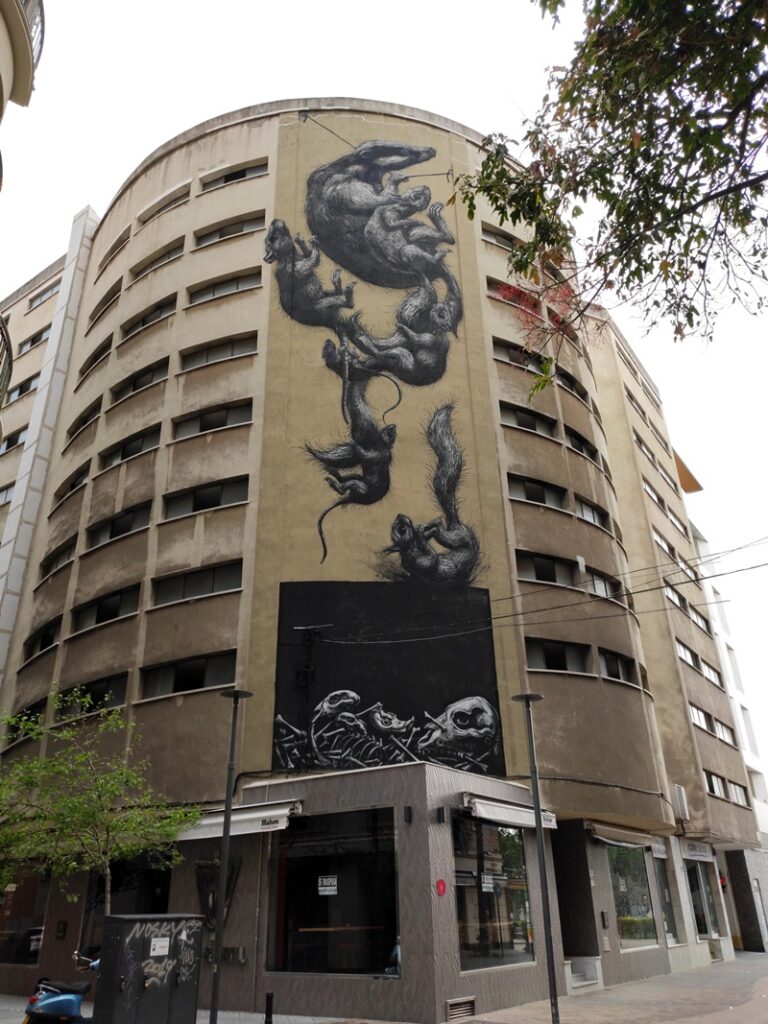 On an artistic level, comparisons with Lagunillas, the other great focus of urban art in Malaga, are inevitable, but at the same time they are unfair.

We cannot compare the work in Soho of world-famous artists who are given every means, including a high salary (€12,000 for a mural), with the work of local or national artists who paint where, when and what they want, even evolving their work several times.

Lagunillas is more pure and authentic, although contemplate the work of D*Face (Pilot) or Faith47 (woman painted in charcoal) it’s a delight. 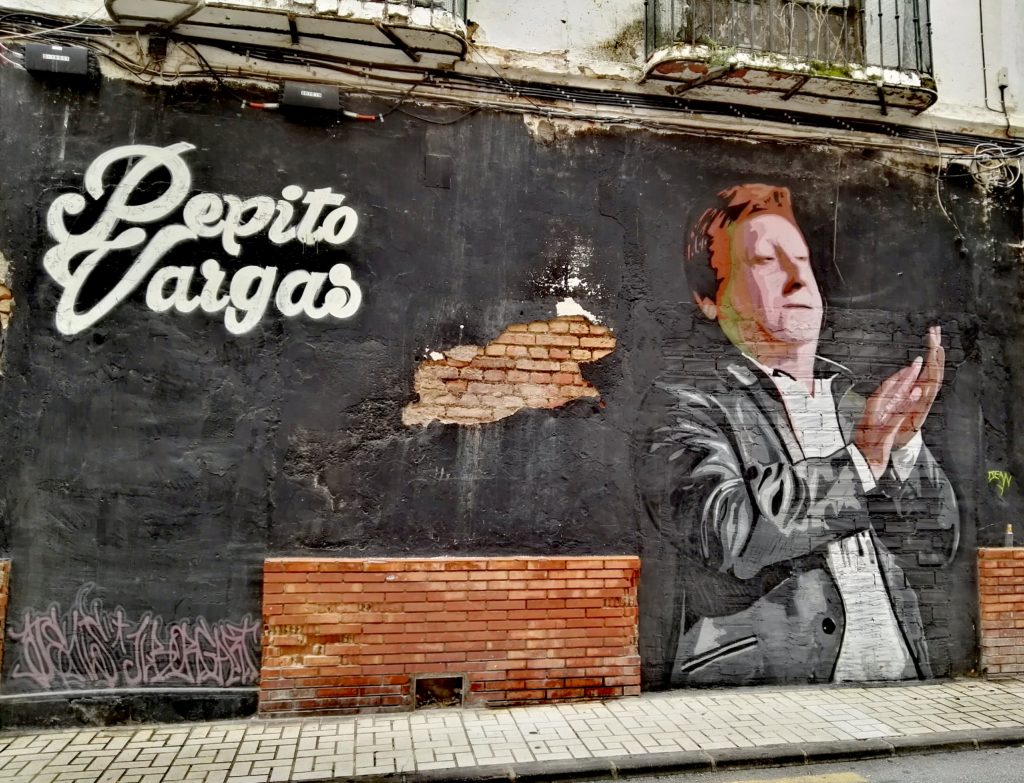 After several years devoting myself at a professional level to explaining the urban art and graffiti of Malaga with my company Street Art Málaga, I see fit to clarify these three concepts a bit so that the route is more enriching and the terms used are understood . 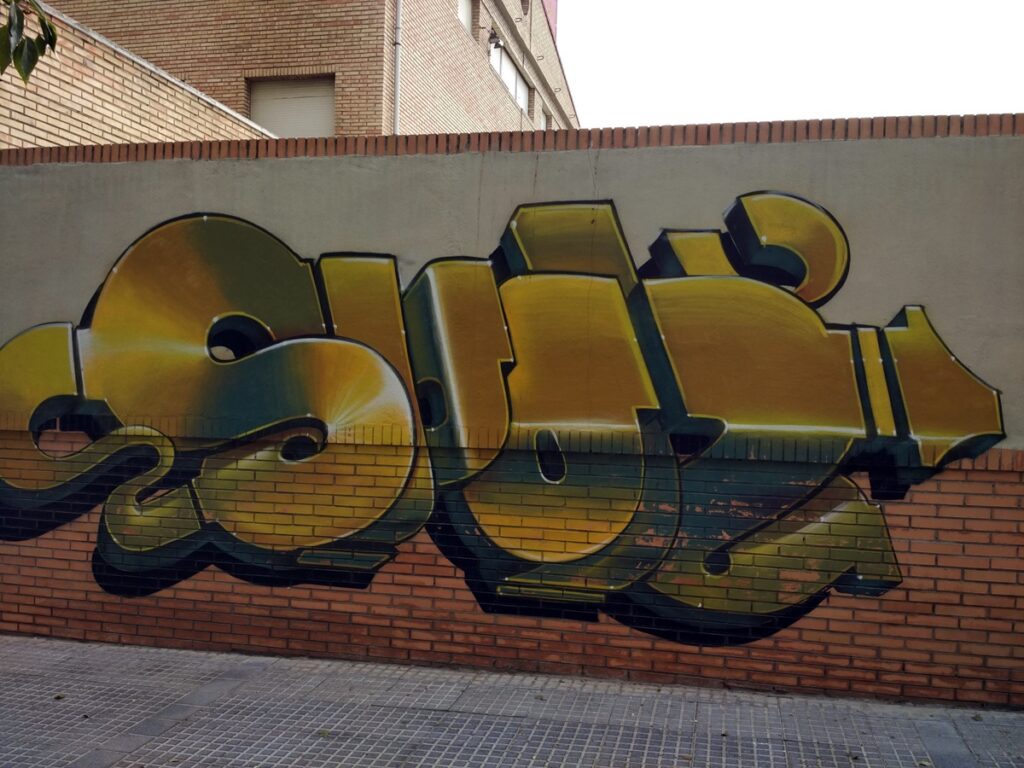 You can go deeper in this video on the differences between graffiti and street art.

In general, in Soho Málaga we have large murals (paid for by the City Council), graffiti (some legal, others illegal) and many works of urban art, which are mostly illegal, although there are legal pieces on some walls.