Weather in Malaga. Best Time and Month to visit Malaga

The weather in Malaga is a typical Mediterranean climate, being mild in winter, with very mild minimum temperatures, which allows the city to be one of the best in Europe in terms of climatology. I tell you all the information and then I recommend the best months to visit Malaga.

Malaga has an annual average of 300 sunny days and only 50 rainy days.

Its location on the Costa del Sol makes Malaga a perfect place, being among the cities with the most hours of sunshine in all of Spain.

In January, which is the coldest month, the temperature ranges from 12 to 20 °C during the day.

Malaga enjoys one of the warmest winters in Europe. The average temperature during the day in the period from December to February is 17-18 °C.

In summer the temperatures are milder thanks to its proximity to the Mediterranean Sea. 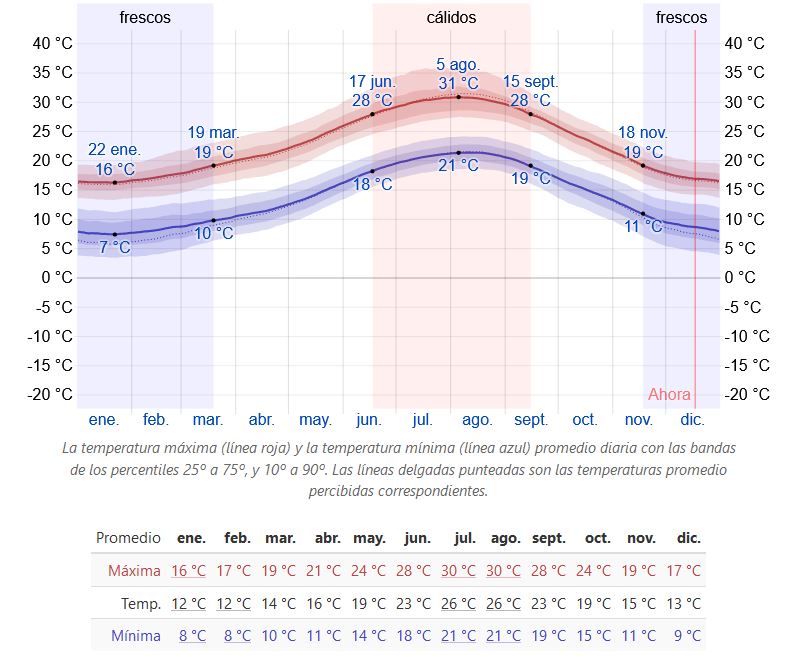 The Sun in Malaga is special

It is often said that the light in Malaga is special and this is achieved thanks to the number of hours of sunshine that we enjoy throughout the year. More than 300 sunny days give the city a special character.

Malaga has an average of 2,901 hours of sunshine per year. The maximum value corresponds to July, with 354 hours, and the minimum to December, with 167 hours.

Precipitation is low, with an annual average of 469.2 mm. The greatest rainfall occurs between November and March, the summer being very dry.

In the year, an average of 70.9 days of rain are recorded, a value that is decreasing every year due to climate change.

The prevailing winds are from the S and SE, the so-called Levante, with low speeds in general.

Knowing the values ​​of temperature, rain and sun in Malaga, it is time to decide which is the best time to travel to Malaga. Actually, any month is good to get to know Malaga, but we are going to refine and give the advice you are looking for to decide one month or another.

In my opinion, the best months to come to Malaga are September and May.

On the one hand, you will enjoy a wonderful climate, with temperatures around 25 °C every day, there will be almost no rain, the sea water (usually cold in Malaga) will begin to warm up and, above all, you will avoid the high season ( from June to August), getting better prices on your accommodation.

This does not mean that not coming to Malaga in winter (November-March) is a bad idea, not at all. Compared to the rest of Europe and much of Spain, in Malaga you will have a wonderful climate that will not drop below 15-20 °C.

In recent years, the month of December has been fantastic in Malaga, with temperatures hovering around 15°C every day and you will also be able to see its famous Christmas lights.

Summer in Malaga is peculiar, because they are moderate, but very humid, due to the proximity of the city to the sea. Outdoor activities may be limited by temperatures exceeding 35°C, but feeling warmer.

In the middle of August we have the other great event in the city: the Malaga Fair (la Feria de Málaga)

Before coming in summer, check the forecast well, because you can find the terral, a wind from the north and northwest, dry, from the interior, which shoots up temperatures, reaching the city during those days the maximum in Spain.