TYPES of COFFEE in MALAGA. Learn how to order them!

¡Un sombra y un pitufo! (A shadow and a smurf)! One of the most repeated expressions in Malaga breakfasts and if you are not from here or have been in the city for a short time, it can get you confused. Today I give you the solution by telling you the history and types of coffees in Malaga, as well as learning how to identify them and order a coffee in Malaga.

If you ask for a sombra (shadow), from now on you will know that you are going to drink.

History of the cafes in Malaga.

In a city where bars and taverns were king, cafes became, at the end of the 17th century, an important part of social life. They say that the coffee tradition of Malaga comes from its Arab tradition (see History of Malaga) and from the many travelers who came to the city looking for that characteristic flavor and smell.

It is important to note that before there were many more cafes than now, because they were a meeting point for gatherings or flamenco performances.

The so-called singing cafes, the most prominent being the Café del Sevillano, which was located in the current Plaza de las Flores or the famous Café Chinitas, which was open from 1857 until its final closure in 1937 and which gave way to the name of Pasaje Chinitas in his memory. 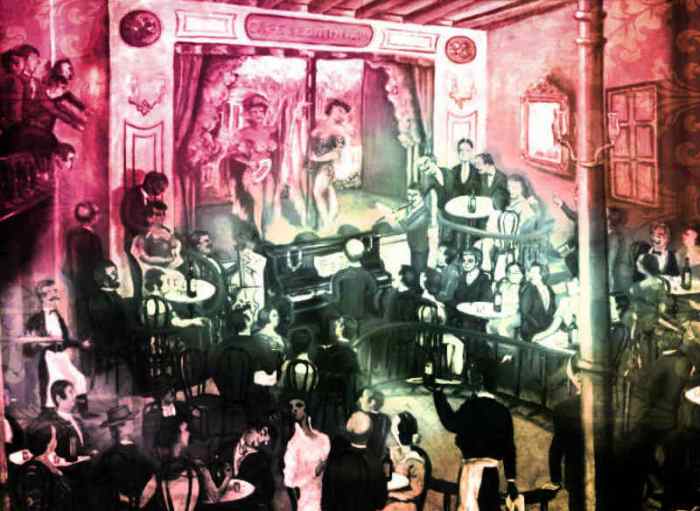 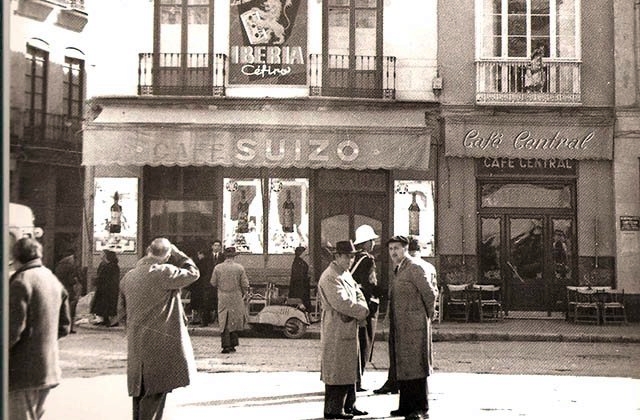 The fame of Café Chinitas came from its flamenco shows, and the attendance of important people in the culture of the 20s and 30s of the 20th century, such as Federico García Lorca, Salvador Dalí, Vicente Aleixandre or Picasso.

From that beginning of the 20th century, dates the opening of two other mythical cafes in the city and they are still open. In 1932, Casa Aranda opened its doors, now very famous for its churros with chocolate and a pilgrimage site for locals and travelers. And 40 years earlier, in 1892, he opened the Café Madrid, which opened its doors as a sweet shop and a small lounge.

Check our top 25 things to do in Malaga.

Opening of the Malaga Central Cafe

Now it is the turn of the Café Central, which will be the key of this story as the peculiar names of the cafés in Malaga come from its owner.

The opening of the Central Café is established around 1920, so we are dealing with a place that is more than 100 years old and that completed, in 1954, its current space with the union of three centenary cafés:

Years ago in the Plaza de la Constitución (before Plaza Mayor) the famous La Loba café was located, dated as one of the oldest of the time.

Types of Coffee in Malaga.

How did the names come from?

To know this history, let´s go back to the year 1954 when we said that the current Café Central (unfortunately closed on Jan 22) was completed with the addition of the other two nearby cafés (Munich and Swiss). This was achieved by Don José Prado Crespo, owner of the café, who invented the peculiar way of ordering coffee in Malaga and which continues even today.

The story goes that Café Central closed for just one hour at dawn to clean and then reopened its doors again.

It was post-war times and coffee became hard to come by, however people who asked for coffee didn’t always want just one, but rather they were asked to add milk or coffee each to their liking. This is explained very well with the expression “put a finger on it”, which depending on the person could be more or less.

This sometimes caused a waste of coffee or a multitude of changes and complaints from customers, but, above all, a lack of uniformity for waiters and users, which is why Mr. Prado Crespo decided to solve it. 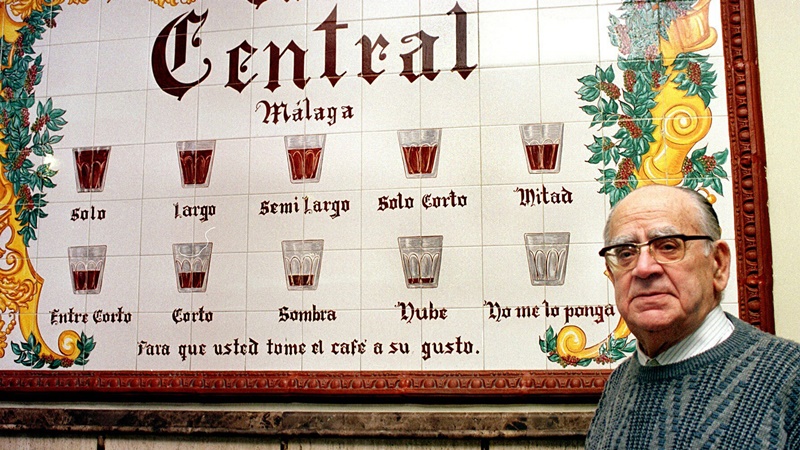 To do this, José, with the help of his most loyal clients, devised 9 denominations, from solo (black coffee) (100% coffee) to nube (cloud) (10% coffee and 90% milk). However, when he was going to make the poster with two rows, he realized that one was missing, so he returned to consult the clients, finding the solution in one of his employees who told him:

Don José, less than a cloud?… well, don’t put it on for that.

And so the nice tenth coffee arose, rather the absence of it.

How to order a coffee in Malaga?

We already know where its nomenclature comes from and some of the types of coffees in Malaga, but here I bring you the complete list from more to less coffee: 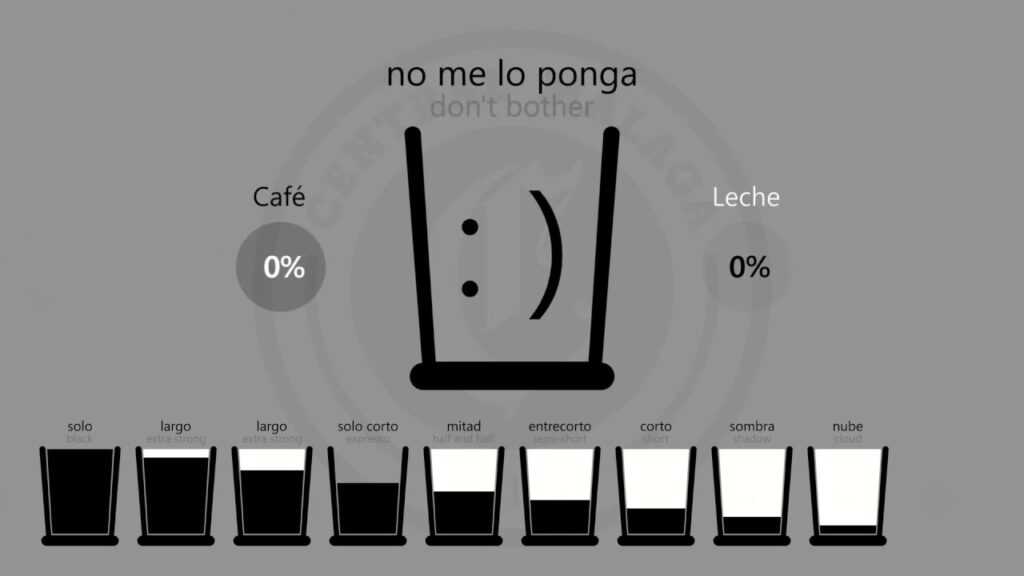 In addition, it is important to note that, usually, these coffees are not served in a cup, but in a glass cup, usually small, although we can go to the large version, just by adding the double word.

Years passed and the peculiar way of referring to coffees became a success, so much so that the company Cafés Santa Cristina, which also started in 1954, requested permission to use it in its promotional campaigns. Two successful models came together: a high-quality roasted coffee (Arabica and Robusta varieties) and a cafeteria in the heart of the city.

The result is that this method of ordering coffee in Malaga spread throughout the city, even the province, so that all possible forms were unified. And, the best thing is that this has been maintained until today, without any change. 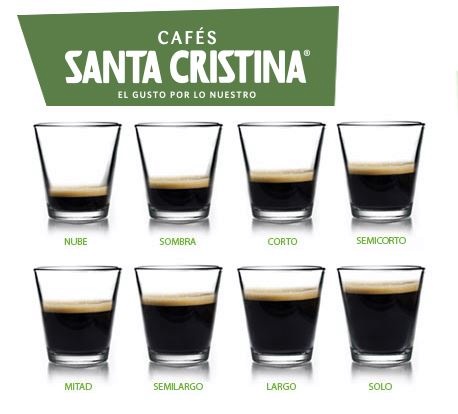 Now yes, you are ready to order your coffee in Malaga by raising your hand and ordering: “Un sombra y un pitufo(*)”. Enjoy it!

(*) This is the name given to the small bread roll, typical of Malaga breakfasts, and that you can orden with olive oil, ham, mixed, etc.