I present my guide to the Malaga Fair 2022, which has the following dates: August 13th to 20th, 2022 in Malaga capital, starting the night of Friday 12 to Saturday 13 with the traditional fireworks at 0:00 on Friday 12 and that give the official start of the festivities.

Here you will find the dates of the Malaga Fair, its history, the poster, where it is held, the venues of the Center and Teatinos (Cortijo de Torres), how to get around, transport options and, of course, the best advice.

In short, the most complete guide to the Malaga Fair 2022.

The Malaga Fair and the Holy Week (Easter Week) are the two most important events in Malaga.

Brief history of the Malaga Fair.

The main thing is to know that the Malaga Fair, also known as the August Fair, celebrates and recalls the capture of the city by the Catholic Monarchs on August 19th, 1487, incorporating it into the Crown of Castile.

The first celebration, after the formation of the Malaga City Council, took place on August 15th, 1491 with a procession. The following year the date was moved to the remembered August 19. The fair was held every year and in the 17th century there were already carts and fireworks displays (something that continues to take place at the current Fair).

On August 19th, a historical parade is celebrated remembering that day, recalling with costumes and clothing of the time the taking of the city by the Catholic Monarchs and which later culminates in a processional parade through the city to the Cathedral.

One of the peculiarities of the Malaga Fair is that we have two celebration zones: the Day Fair, in the center of Malaga, and the Night Fair, held in the Cortijo de Torres (Teatinos area), although this fairground already It has activities all day. You have more details in each section of the Fair. 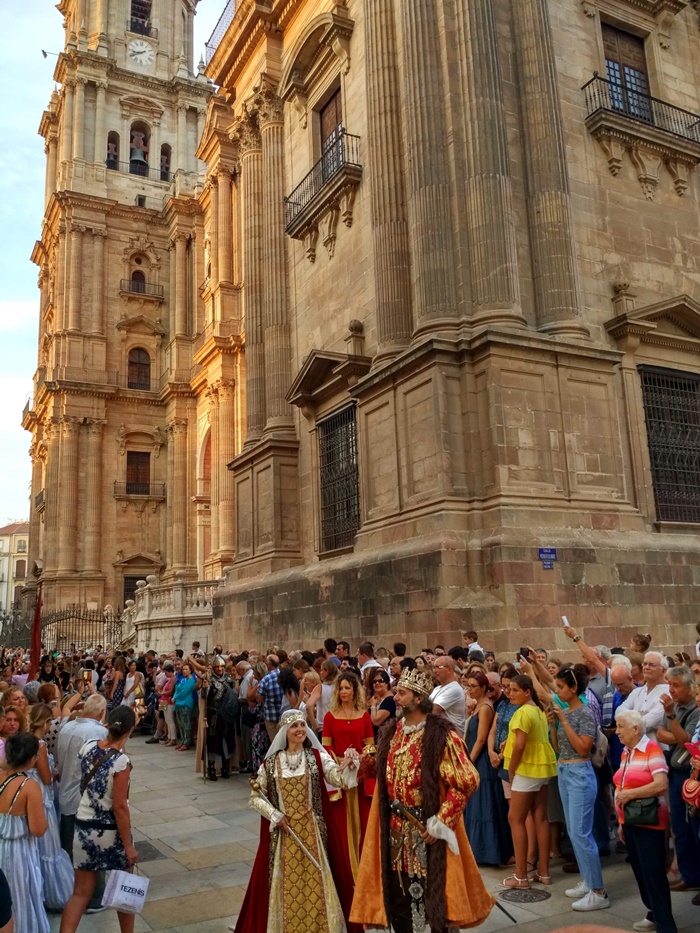 The Malaga Fair 2022 is celebrated from August 13rh to August 20th, with a duration of 7 days. The important thing is that August 19th is always included in the week of celebration, as a historical date as a commemoration of the Reconquest of Malaga by the Catholic Monarchs and its incorporation into the Crown of Castile.

The fireworks of the Malaga Fair.

Before starting with the fireworks, someone important in the city (Estrella Morente, Antonio Banderas or Pablo Alborán) makes the so-called Fair proclamation, with a few words dedicated to the city and those days.

The fireworks give the official starting signal for the celebrations and are held in the early hours of Friday the 12th (0:00) to Saturday the 13th. They last approximately 20 minutes. That night there is no Fair as such, but many people take the opportunity to go out through the center of Malaga, being a pre-fair and the preview of what begins on Saturday 13th.

The fires are launched from the Malagueta area and the port of Malaga and are visible from many points in the city, even from Torremolinos or Rincón de la Victoria we can see it. The ideal place, used mainly by families and locals, is the beach, with the Misericordia and Malagueta beaches being the most popular.

If you want to see it from the center of Malaga, you will have to look for an elevated site (Coracha or Castillo de Gibralfaro) or one with good views of the bay such as Muelle Uno.

Considered one of the most important fairs in Spain, the Malaga Fair is a key event to get to know the culture of the city and a must if you have never been to the city. It is estimated that in the week of celebration (August 13th to 20th) 1 million people visit it.

It has nothing to do with the Seville Fair, where the booths (of the night fair) are mostly closed/private, here almost everything is open to everyone, so you just have to want to have a good time.

The first thing is to know that in Malaga there are two fairs, one during the day and one at night, which can be combined on the same day, held on separate days or opt for just one of them. I explain how each of them works and the most important thing you should know. 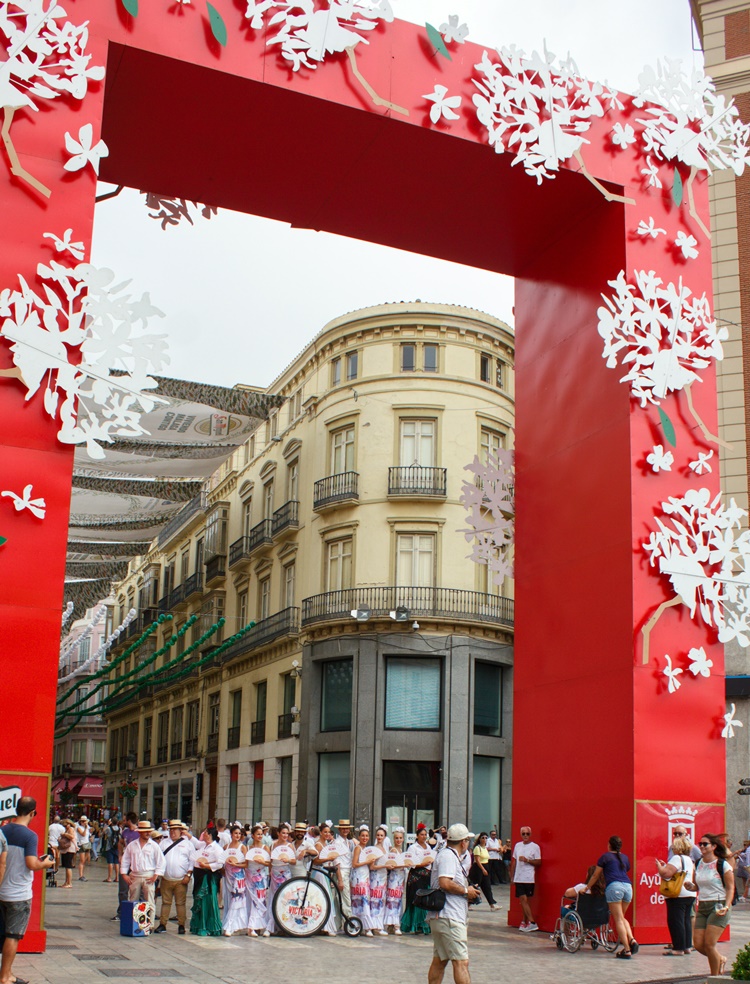 The center of Malaga is decked out for its big festival and from Saturday, August 13th, the streets of the historic center, starting with Calle Larios with its imposing doorway (which varies every year), are decorated with lanterns and floral decorations.

Here we can find the classics of a fair, people dressed in flamenco dresses, verdiales singing and entertaining the streets and people, many people. The atmosphere is very special and everything comes together in the Plaza de la Constitución, where you will find tents to drink and eat, a stage for musical performances and you can move through the other important streets of the center.

The hours of the Day Fair are, as a general rule, from 12:00 to 18:00, at which time the music in the street turns off and many people begin to enter the bars and pubs in the area.

For the fair forget the car and use public transport or walk from your home or accommodation, there is no better option. 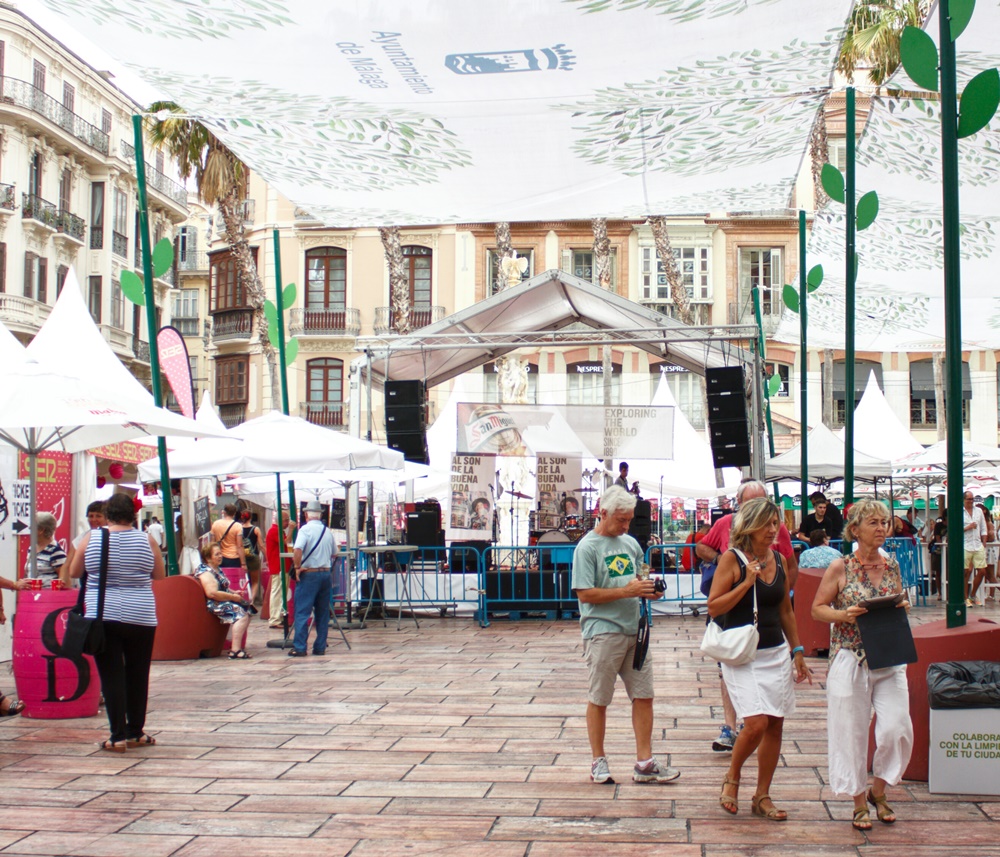 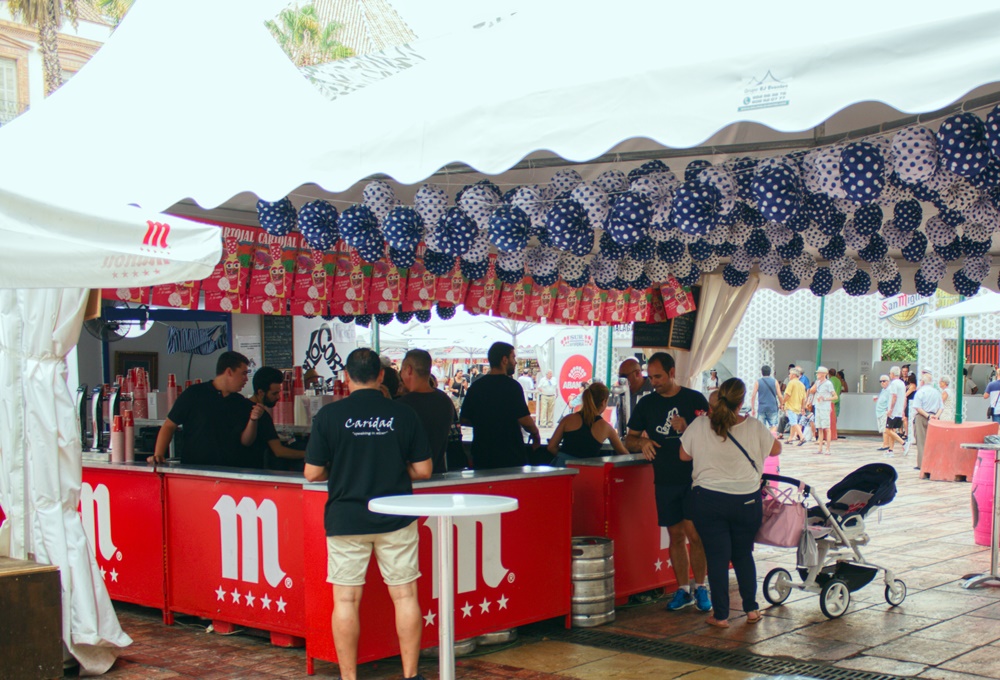 Where to move in the Fair of the Center of Malaga?

Knowing that the main street is Calle Larios and that the only option is to walk, other important places where you will find atmosphere and a fair are:

A good option to have food, drink and party in the same place and in the open air is the Colegio de Arquitectos (College of Architects), located in the Plaza de la Constitución.

In general, the entire center is decorated and with an atmosphere, although consider the limit of the Cervantes Theater as the last place where you will find a fair in the center.

Where to eat at the Malaga Center Fair?

The usual thing is to eat on the street in one of the booths available, where you can taste classic Spanish and Malaga food: potato omelette, montaditos de pringá, chorizo, ham, migas, paella, etc. and you can also buy drinks, being the classic Malaga sweet wine: Cartojal, although you can also buy bottles in nearby shops and get beer and other drinks in nearby bars and bars.

Rebujito (sweet wine with Sprite/lemon-lime drink) is not common in Malaga, but you can find it without any problem.

If you are looking for some classic places to enjoy the Malaga Fair and its tapas, you can consult: My classic tapas route through the center of Malaga.

Until a few years ago, the Cortijo de Torres Fairgrounds, in the Teatinos area, only hosted events at night, but that has changed and the activities program of the fairgrounds during the day is becoming more extensive. The Malaga fairgrounds have two entrances with two different covers, which are illuminated for the first time on the night of Saturday the 13th, one on Avenida Ortega y Gasset and the other on Camino de San Rafael.

This enclosure is where the classic stalls of a fair, mechanical attractions and stalls, many stalls, clubs, associations, bars, political parties, press, individuals, etc. are located.

Today, the Cortijo de Torres Enclosure is where the horses and harnesses are located, but not only that, but they have tried to create an environment at noon so that it is something to visit for the whole family.

One of the ways to attract more public during the day is that the booths offer free food (usually paella) from 1 to 3 p.m. 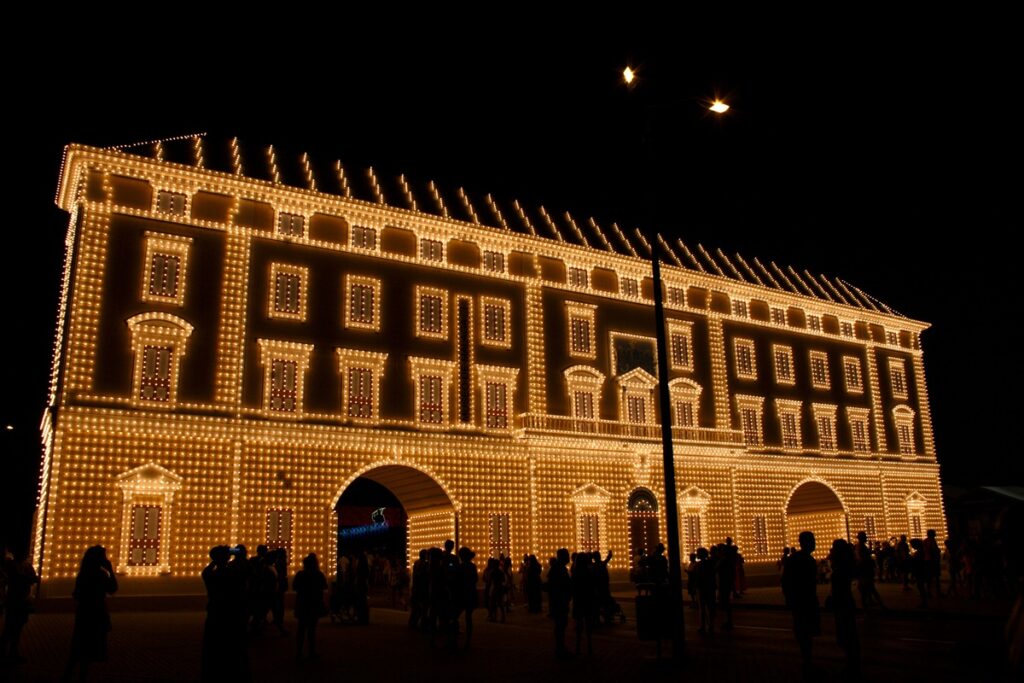 What to do in the Cortijo de Torres?

Here the usual option is to visit different booths, which we can choose depending on the music and atmosphere they offer. There are casetas (booths) that only offer food and drinks and others that are more like classic bars, with a cocktail bar and a dance floor.

Also, next to the Fairgrounds is the Municipal Auditorium, where every day there are concerts with local and national artists. The program will be updated on the official website. 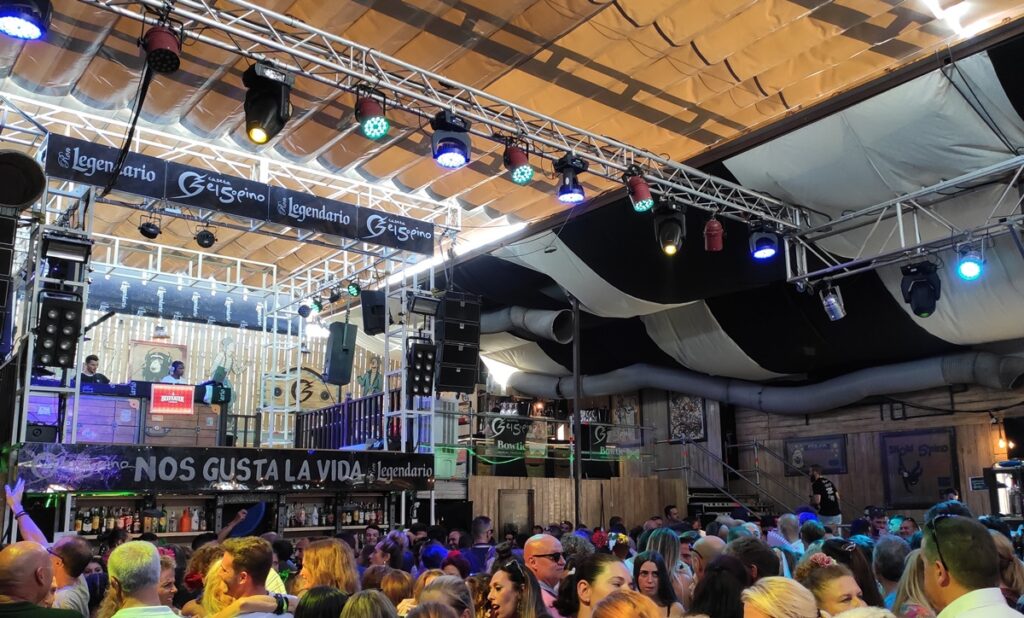 How to get to Cortijo de Torres from the day fair?

The most common and cheapest option is by bus, as there are services from many lines that connect both points and even shuttle buses that cover this route. Another option is to go by taxi/Uber/Cabify, which will be faster, but also more expensive.

The option of walking is not contemplated, since both areas are separated by more than 6 kilometers.

When night falls, almost all the lines of the EMT Malaga offer services to and from the Cortijo de Torres fairgrounds, which extend until dawn (6:00 am). You will also have taxis and VTCs available to make the journeys.

¡Hola! My name is Alejo Tomás.

I´m from Málaga, creator of Street Art Málaga and 21W. I completed a round world trip during 1 year, visited the new 21 wonders of the world and I´ve lived in many countries (France, Germany, Denmark, Italya). Now I´m back and I decided to show my city.